Depending who you ask, breaking The Undertaker’s undefeated WrestleMania streak would either be the best or worst thing that could happen for WWE. On one hand, if Undertaker loses to CM Punk Sunday night, it cements Punk’s legendary status and will help the wrestling promotion earn more money in the coming years by featuring the hated heel who put the 1 in Taker’s 20-1. From a passing-of-the-torch perspective, it’s the right thing to do for the business.

On the flip side, Undertaker means so much both on screen and behind the scenes in WWE, that as long as he wants to wrestle, his streak should remain alive as it’s one of the true selling points at each year’s big show. Besides, Undertaker beating Punk also keeps open the opportunity for John Cena to challenge the streak at WrestleMania 30 (talk about a money maker).

But not so fast, as I had the chance to get CM Punk’s perspective on his upcoming match, his recent use of the piledriver, and where he sees his career headed post WrestleMania.

Here’s what the controversial wrestler loaded with verbal pipe bombs had to say. Let the explosions begin.

ESPN Playbook: What would beating The Undertaker at WrestleMania do for your legacy?

CM Punk: I think it would do something tremendous for anybody’s legacy. Some people get excited just because they’re wrestling The Undertaker at WrestleMania, but I’m not really in awe of anybody I wrestle; I’m here to beat him. It’s one of the only things I can possibly do to top my career moment I had in Las Vegas when I cut that infamous promo.

Undertaker is known as the locker room leader in WWE. With him being gone for almost a year, who filled his role behind the scenes?

I’m not really sure anybody could fill Taker’s shoes, and I don’t think anybody is trying to, either. God help us all if I’m the leader, but when you look around the landscape, there’s really nobody else besides myself and John Cena. That’s about it.

The Rock took your title and broke one of the most historic championship streaks in years, then is too busy to attend every Raw leading into WrestleMania. Do you think it’s bad for the company when the champion isn’t even on the show?

I do, yeah, but it’s not my company, so that’s where we are with that. [laughs]

Do you hope for a third match against The Rock sometime in the future?

I don’t think it’s in the cards, but I wouldn’t say no to it.

Paul Heyman is acting as an advisor to both you and Brock Lesnar. Are we ever going to see you guys join forces in a tag team?

How about a match against Brock? Is that something we can expect in the future?

I think that would be horrible for him. He doesn’t want to fight me. 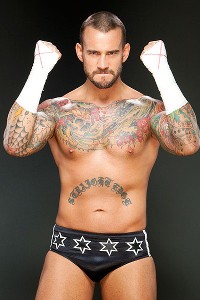 Courtesy of WWECM Punk isn’t once to hold back, whether on the mike or in interviews with journalists.

Do you think fans appreciate enough all of the little things Paul Heyman does on screen that helps add to the atmosphere, like all of his facial expressions and the way he used to hold your belt high over his head?

As a fan, what WrestleMania match are you most looking forward to watching?

Fandango versus Chris Jericho. You probably don’t believe me, but it’s true. I can’t remember the last time somebody debuted at WrestleMania, and Fandango is actually one hell of a talent, so I’m excited to see where this goes. Besides, it’s Chris Jericho. You can’t go wrong with a Chris Jericho match.

How about as a kid growing up, is there a WrestleMania moment that stands out as your favorite. Maybe something that happened that made you want to become a wrestler.

I only got to pay attention to what other people were saying about WrestleMania because I didn’t start religiously watching them until about WrestleMania X. Bret (Hart) versus Owen (Hart) is one of the best WrestleMania matches ever, so if anything made me want to become a wrestler, that match was it.

The Shield has debuted in huge fashion. What do you think of the potential of these three newcomers both as a team and individually?

I think there’s huge potential for all three of them. Roman Reigns came in as a relative unknown, but he’s more than pulled his weight. I think you can definitely see any three of those guys becoming a future world champion.

Looking at the WrestleMania 29 card, when the show is over, what do you think people are going to leave MetLife Stadium talking about the most?

My match. I’m out to prove people wrong again. I don’t think it’s a secret that I wanted to be in the main event at WrestleMania and I don’t think it’s a secret that people are like, “But you’re in one of the main events, you’re wrestling The Undertaker.” But I’m not one for consolation prizes. I’m out to steal the show, and I’m out to do the improbable. If I’m able to do that, that remains to be seen, but we’ll find out.

Your match against John Cena on Raw a few weeks ago was one of the best matches I’ve seen this past year. I like how he busted out the hurricanranna and you busted out the piledriver … it made the match feel special with these big moves. Can we expect something similar against The Undertaker?

Absolutely, especially with me. [laughs] You never know what I’m going to do.

Isn’t the piledriver a banned move? Did you get in trouble for doing it on Raw?

How did the move get banned? It’s something that has been in wrestling for years.

It has a bad history of injuries and accidents, so it’s better safe than sorry. It’s really sort of not worth it, but I wanted to show that I was really trying to win that damn match.

Funny how doing a move that is banned ended up working in your favor and giving the match a more epic feeling.

Funny how that works out sometimes.

You were on the cover of “WWE 13,” and now 2K Sports is taking over development of the new game coming out this year. Is there anything you’d like to see in the upcoming game that they weren’t able to capture in “WWE 13”?

Oh God, it will be interesting to see what they bring to the table, video game-wise. THQ always did such a great job. I can’t think of anything that they need to add. It’s always kind of creepy to look at myself in the game. It’s almost like looking at still photos.

I’m not sure about Undertaker’s health and if he’ll stick around much after WrestleMania, so after your big match this weekend, who do you see yourself feuding with next?

I would honestly love to tag with Brock Lesnar. If it was up to me, I would do that and take on Kane and Daniel Bryan or Dolph (Ziggler) and Big E., whoever has the straps after WrestleMania.

Living Colour To Perform At Wrestlemania